Things have been busy since my last blog.  Along with normal day to day support items, I have been advancing several projects.  I have had some time to multi-task in making changes to our support portal.  We have found that the time that I invest in improving that software is easily recouped down the road.  For many years licenses were granted via files and the command line.  Things have gotten more complex since this infrastructure was first deployed.  We have more staff members, we have lots more software packages, and licenses are being moved around more than ever.  So I created a new way to hold the licenses and wrote a little script to make the conversion and integrated it into the support portal.  Now our support staff can go into the software package (as loaded from the .desktop file) and with a few clicks add permissions for users to launch this software.  They also can point the license to the physical paperwork; and a thumbnail is generated to show the document.  (as seen below). 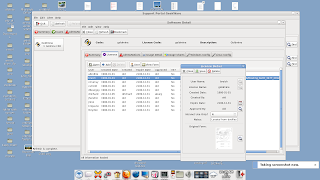 I also mined into the log files where we track usage and added some fields to display stats of our various packages.  We have so many software packages now, and very often people buy things and never use it...so now we'll have more data with which to review if software should be removed from servers. 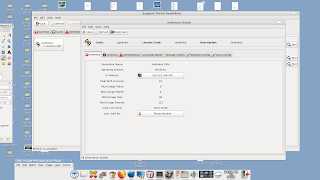 Everything seems to be working well in our sandbox test area.  With just a few clicks licenses are granted and revoked, all changes are logged and the license goes live immediately.  The user can click on the icon and it works as soon as the save is made.

As part of this code, I added a "Usage" tab from the front UI of the portal whereby we can watch in realtime as icons are clicked.  We also can see which applications are being used the most and by whom.  I'm going to add some buttons below the software categories that will show which users launched these applications the most during the current search window.  When viewing the current day, this might indicate that they are having some problems or technique issues that need our help.
(Very often people never call...even when they are having serious problems.  We want to identify these issues and be proactive) 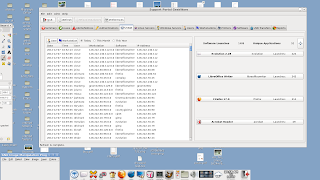 Other projects have continued:  I have been testing LibreOffice 4.0 Alpha along with some other employees, a few issues found and bugs submitted.  We have the hardware now for the final deployment of Zimbra, so I installed Ubuntu 12.04 server and applied patches and got everything running.  Next week we connect it to LDAP and we will test accounts and passwords.