Yesterday we received our first HP 5745 thin client, and I'm pleased to say that it's working well so far. The onboard Intel video card supports 3D/Compiz and will not require us to add our own video cards; which will lower their price point by at least 75 dollars. Compiz is fluid and responsive and movement is crisp.

It was really perfect timing for the 5745 to arrive. I had just finished the Lenny update for the 5725s and 5735s and the build installed and booted with very few modifications. So for us, all three models will run the same operating system and have identical features. I just need to write a small amount of auto-detection code for first boot.

In the next few days, I'll take the new thin client apart and take photos of the internals. The new footprint and design is excellent; it's only 1.75 inches wide. 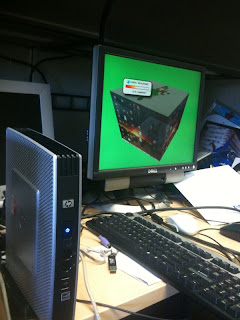 This issue apparently is well documented on the Internet, but it was new to me. Quoted from Wikipedia:

XRandR 1.2 only permits one virtual screen per display device. It is not possible to assign each monitor on a device to a different screen (sometimes called "Zaphod" mode), or to combine monitors from multiple devices into a single screen.[3]

One practical limiting effect of this is that it is not possible to run a different WM on each monitor, since window managers are limited to one per screen.

These specific issues are resolved in XRandR 1.3[4], but the Xorg Foundation has been criticised for removing useful, and widely used[citation needed], functionality before an effective substitute is available

HP ports Debian Linux to our thin clients periodically, and I then take their builds and customize them for our needs. I was pretty excited to be able to deploy Lenny after it was finalized on our hardware. But it turns out that Xinerama support was dropped before xrandr (1.2) was feature complete. After lots of tinkering I was able to get dual screens working, but unfortunately it seems that VGA-0 is hard wired to be your left screen and DVI-0 is the right. When they are flipped, XDM authentication and the GNOME panel open on the right screen which doesn't work well at all. So the net result is that when we touch thin clients that are running two monitors, our support staff is going to have to move cables and move things around. We purposely put the DVI monitor on the left side because it offers a slightly better picture quality.

As was noted in the Wikipedia article, three monitors are not supported at all, so we are going to have to run Etch on users that need that many screens.

I guess the point I wanted to make is that I understand that things need to evolve and move ahead, but there are really people using features like Xinerama. I don't care if something replaces it, but please don't drop the old features until the new ones are working. It's embarrassing that our custom GUI when the thin clients boot the first time looks like this now (Three Monitors is disabled): 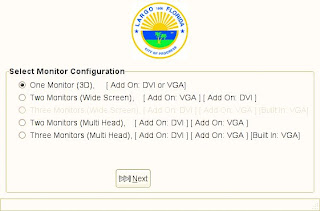