Lots Of QA Work And Testing

As December begins I have been reviewing my workload and the next 30 days is going to be busy with QA and software testing of several software packages. I have finished the next thin client OS upgrade and it's now in the hands of our Support division who will schedule it for deployment to our 550 devices.

My projects at this time, in no order:

Firefox 3.6 & Flash 10.1: Adobe labs released 10.1 and I have integrated it into Firefox 3.6 for testing. So far both products seem to be working. I'm also checking into the proxy and bandwidth issues for the Personas. Cool bling, but lots of traffic for hundreds of users to be hovering their pointers over the images and trying them out.

Evolution On SLED 11: We are waiting for integration of patches and official RPM to try and reach a milestone that will allow the rest of our users to be moved to this new version. About 190 people out of 750 are using the new version.

OpenOffice 3.2: It's getting pretty close and several features that users have requested are available in this new release. It also includes a feature in Impress that we bountied. I developed a new python/Glade GUI that pops open the first time you launch 3.2 announcing the new features.

Tomboy on SLED 11: We haven't upgraded Tomboy in a while, and I hope to soon install Tomboy on SLED 11 and get that deployed to our users to replace the current SLED 10 version.

Compiz & gnome-shell: Our current GNOME desktop servers are starting to get a bit old and I'm opening a new project to begin the process of moving to something newer. It probably will be OpenSuse 11.2. This would take many months, and probably would go live in the next 4-6 months. It looks like we will use compiz for one more iteration of the desktop and then explore gnome-shell on the next major upgrade around 2012. Gnome-shell is not yet optimized and tested for remote display and won't be ready in time. I'm going to check on the status of the C++ port and make a decision about which version to try and deploy.

ZeitGeist: I have promised to check out this technology for enterprise use, and will be doing that in the coming weeks. I have to consider how it integrates with Tracker, how to replace or compliment the features we have in Beagle, how to run this via cron jobs and not hammer drives during business hours. I also have to experiment with NFS mounting the data stores that Zeitgeist is mining, they aren't all on the same physical computers.

Thin Client DVD Support: I have been thinking about possibly loading a software DVD player on the thin clients for users that have permissions to mount DVDs. Increasingly they are receiving training and demo videos on DVD media. Lots to consider with this move, how to stop them from playing "_Dumb and Dumber_" ? :)

Lots to do, and always fun. My thanks to everyone that works on these technologies, you do the hard work!
Posted by Dave Richards at 3:08 PM 6 comments:

When we went live with our HP thin clients 2 years ago, one new feature we added was the ability to use USB sticks and transfer files. I know there are some tools for doing this already, but opted instead to use FTP. I felt that using a stateless connection would be more stable, and also allow us to use this feature when people are logging in with NX over low bandwidth networks. As long as the server can resolve the remote IP, it will find the FTP daemon running on the remote thin client. FTP already works fine over differing network speeds, and once the transaction is complete nothing is mounted back to the server. Very clean to me and has worked well.

After some conversations in our architecture meetings, we have agreed that CD/DVD readers are really no different than USB sticks; and in fact they probably can hold fewer files these days. So I made a last minute addition to our new thin client update to support these types of drives.

When you plug in a USB stick, it's appropriate to just mount it immediately. I then tuned the thin clients to always flush data every 10 seconds. So we tell people that if they place files on USB sticks, just wait 10 seconds and then they can remove the stick. udev sees the stick being removed and the mount is removed. This is working well, and avoids having to have some kind of "Safe To Remove" panel app that we know people don't use anyway. :)

Being that CD/DVD drives have to eject, I couldn't just mount the disk when it's inserted..or they wouldn't be able to eject the disk. The GNOME desktop is running on the server, so it too is not aware at all of these drives. So I wrote a very simple UI that pops up (no GUI Nazis please :) ), when a drive is powered on. This is running on the thin client itself. I tried to keep it to the bare minimum and so far it's working well.

When the USB CD/DVD is turned on, udev starts up the small UI. When they click on the Mount button, it generates a directory name based on the physical hardware and creates the mount. The whole idea of mounting things to usb0, usb1 and so on has not worked well because users never were able to figure out which directories were in use. So now they only see the drives that are mounted, and each has a descriptive name. In the shot below, you can see the directory mounted from the drive after it's mounted. 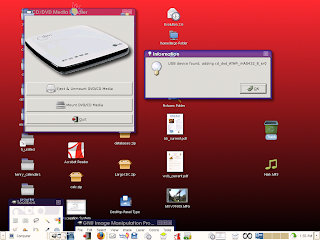 The users then double-click on the USB icon and up comes Nautilus which is FTP jailed to just USB devices on the thin client. Proftpd only displays files types which we have approved. To the user, this looks just like a regular file manager that they always use. In the shot below, pictures and videos are displayed from CD media. 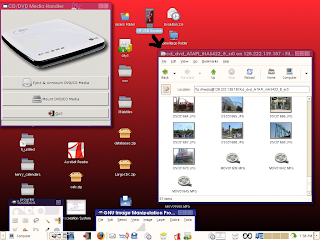 The user then drops and drags the files to the desktop, and the FTP feature of Nautilus is activated. Thumbnail generates and the file is now stored on the server. 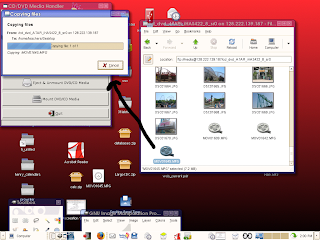 I'm sure there are other ways to do this, and this definitely falls under a WFM; but if you are deploying thin clients and wondering how to handle these devices...maybe this will be a good solution.
Posted by Dave Richards at 2:05 PM 1 comment:

The City uses Groupwise as our post office to house all of our email and calendar data. There were some mandatory calendaring requirements from our employees and GW best fits those needs. Last weekend, we upgraded from version 7 to 8. We are experiencing normal problems and awaiting some patches, but overall it went pretty well.

One of the things that comes up often in our contact with Novell is the issue of us using Evolution vs their Java client for Linux. We had tested the version 7 client a few years ago and it was not a good fit for us. So I checked out the new version with an open mind.

A lot of work has gone into making this release have feature parity with the Windows version, and they seem to be making progress. One of the things that the users really liked about Evolution 1 was the old Summary Screen, and Groupwise 8 has a similar feature (shot below). 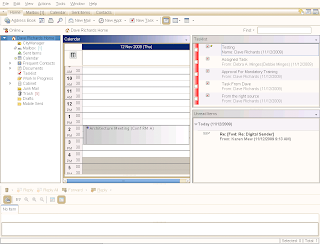 Another nice feature is the ability to enter your own notes and comments on each email message as pictured below: 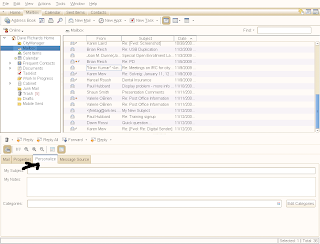 Overall from a feature standpoint, it seems robust and delivers in that regard.

So why don't we use it? The client runs on Java, and unfortunately it's S-L-O-W. To be fair, I installed the client on SLED 11 and it's running on the same server as Evolution 2.24. It flickers a lot at startup and on resizes, drag bars are painful to move, pulldown windows are slow. It's entirely possible that this product works perfectly on a local video card, but over remote display it's really pretty painful.

The other issue from version 7 that remains is that it consumes a lot of memory, and then continues to leak badly. When you are on a standalone computer, it might be ok for 1 or 2MB to leak at a pop, but when you have 300 users running, that suddenly becomes 300MB or 600MB for me!

I started the client and then opened top. Below you can see the client running along with the same email opened in evolution for my account. 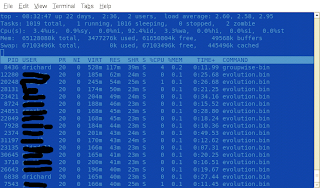 After just a few minutes, it was already leaking (below). 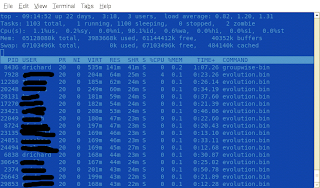 I'm going to run it all day and see how bad it gets. At this point, there is no way this would scale and provide the performance that users expect in our environment.

It seems like from time to time there are discussions in Novell about Evolution vs Java, and where to use development resources. From our perspective and needs, Evolution is far better and we hope that Evolution continues to get the TLC it deserves.
Posted by Dave Richards at 9:18 AM 2 comments:

I get email and know that some of you are thinking about thin clients in your organization. I have always tried to be honest and describe what works and what doesn't.

After a good amount of testing, we have been unable to get the HP 5735 to work well enough to put into production. They may work in other areas perfectly well, but our goal was to add ATI 9250 video cards to them and use them for the 3D desktop. Even though they have higher specs than the HP 5725, under no conditions have they ever run faster. 3D performance is very sluggish and certainly not fast enough for day to day use.

I know this isn't a perfect test, but the results seemed to correlate with Compiz "feel". It also could easily be replicated by anyone else. For my test, I booted an X server with just a xterm window and then connected to our remote Compiz servers and ran glxgears. The 5725 was the clear winner with 653 FPS. I also tested the onboard X1200 and then 2250 video cards.

We only purchased a few 5735s for testing, and will be moving them into our cyber cafes which don't use 3D and for that purpose they will work well.

We will continue to use the HP 5725 (which works great) until we have another device that performs as well.
Posted by Dave Richards at 8:35 AM 12 comments: