We had been testing Alfresco Community 4.2.c for a good while and getting positive feedback from our users.  Version 4.2.e came out and appears to be the version that will release as "4.2".  Naively, I thought there would be a ./install type upgrade with the latest code.  Alfresco upgrades are really more of a dump and reload, which increased the complexity of this greatly.  We decided to allocate some better hardware for this pilot project and for me to take the time to teach myself this process.  In a nutshell, you dump all of the data from Postgres and then it is restored on the new hardware.  You then bring over the alf_data directory and start up the daemons and hope it all works.  After a few test runs, I worked out all of the kinks and it came over and has been made available to end users.

The LibreOffice 4.1 CMIS connector sadly no longer works with Alfresco.  I brought down LO 4.2 (Alpha) which has been resynced with the latest libcmis changed and it works like a champ, better than ever.  I have "upgraded" 5 of us to this release and we are going to begin testing saving and editing documents directly via LibreOffice -> Alfresco.  Response time and folder refreshes are much faster and the library changes are noticed and appreciated.  Let's see what feedback we get from the end users.

In the shot below, the new icons and art with Alfresco 4.2.e, and LibreOffice 4.2 making direct edits to files stored within the database. 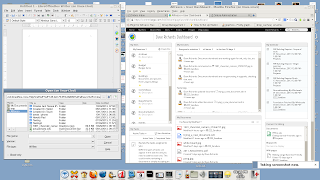 Firefox 25 is out and fixes the issue of not honoring umask from the parent shell.  5 minutes after download, it was installed and live and we were fully patched.  800 users will be very happy about their file permissions.

Current Projects:  I'm looking over Ubuntu 10 loaded on the HP t610 thin clients and checking to see if it can be easily loaded onto 5745 and 5725 model thin clients.  This will continue with our design of having the same operating system on all workstations. I expect it to work, and easily.  Testing NX 4 client and server with the concept of using NX between all workstations and the server.
Posted by Dave Richards at 2:33 PM No comments:

Yet again a good number of days have gone by without a blog posting.  Projects and upgrades have consumed most of my time in the last few weeks.

NX 4 was released.  I had installed and looked over various beta builds as it was being developed, and I put the released version on a VM copy of your primary GNOME desktop server.  The install process is a piece of cake, and you just edit a few .cfg files to point to the right scripts to run at startup and away you go.

One notable feature is the ability to connect with a browser and get a full GNOME desktop and run all of your software without modification.  As seen below, you enter a URL and up came the desktop.   Speed on Firefox 24/Linux is very acceptable. 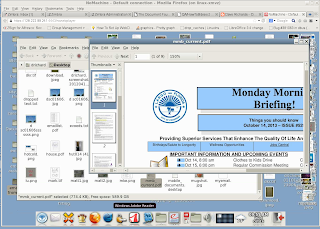 This browser solution has not proven itself to work well on tablets, even over local WiFi.  But I was happy to see this on the download page: 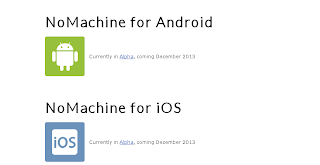 Tablets have been interesting to me because one school of thought is that people would log in and get a GNOME desktop and work as they do from their desk.  Another thought is that they would work more client/server and download documents and use local software and then upload.  By far users have expressed more interest in the former.  They don't seem to want to use different/local software and want to use what works here at the City.  So the clients for iOS and Android will be greatly appreciated and used.

The biggest issue for us right now with NX 4 is that the clients are not yet ready for deployment in a multi-user environment with "regular users".  NX3 clients allowed you to automate the login process and once they entered their account/password...GNOME came right up.  NX 4 has a lot of prompts and questions which are better suited for power users.  As it stands right now, we would be bombarded with questions and support and there would be a drop in productivity.  If a user is attempting to connect, they have work that must be finished.  If they fail, that work doesn't get done.  There are plans on the roadmap from what I understand to add more of these entperprise features in the future, and we'll have to wait for them before we can deploy.

EDIT: Sarah from Nomachine posted information on this issue on the comments section.  We were unaware and are going to test.

Our in-house support portal is still helping us monitor all aspects of a thin client and centralized environment, and some modifications have been made.  It's wonderful that when you have ideas, you can just throw in a few lines of code and it's done.

We're using the issue tracking module now for all calls received and the data is very interesting.  In the shot below you can see that in the last 24 hours our primary support call center got around 20 calls.  This is with many hundreds of users logging in and out of the workstations and using software.  Our current regular concurrent load is right around 300 users.  I have said it many times before, that using thin clients allows your staff to work on maintenance and future projects vs spending lots of resources keeping support intensive PCs running.  I marked the general trends of problems 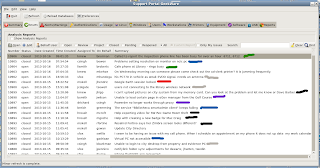 I also hacked in a quick screen on the user detail area to show documents edited by the user.  Very often people call and have "lost" their document...or sometimes they make edits to a document in /tmp accidentally and then it's lost when this area is purged.  Now at a glance we can assist them without having to look on backup tapes and such.  Very helpful. 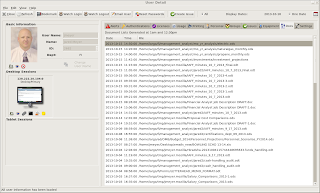 This isn't unique to LibreOffice 4.1, because it's happened going back all the way back to OpenOffice 1.1.  Whenever you get a patch or even more so, whenever you get a major release there are always issues where documents don't work correctly.   I keep all of the old versions on the server and can always test and find the regression.  Standard procedure then is to rollback a user until we get a patch and then upgrade them again to the latest release.  This was done by me, with hard coded scripts.  I put this into the support portal and now anyone in IT can either roll their own account back or rollback another user to solve these types of problems.  All of this activity is logged, and we're nagged once a day of people on prior versions so that we continue to try and resolve their issue. 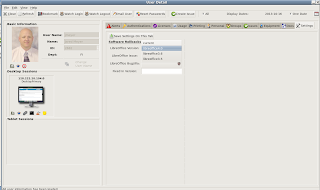 These users are on 4.0 and everyone is happy and working.

Firefox 23 had an issue with saving files, the files were saved as 600 on Linux and no longer honored umask.  When then happened was that work flow for many people was interrupted because as they shared files with others, they could not be opened.  In general users do not understand how to use file permissions nor how to change them.  The Firefox developers came through in a pinch and a patch is already landing in time for version 25.  Thanks guys.

We have three non IT people starting to test Alfresco 4.2 as a proof of concept.  Deployment is not imminent at this point because we don't have the staffing; but it's gaining some steam and people are starting to see the power of working in this manner.   The testers are putting PDF content into the Alfresco database and then seeing that it's immediately available on their tablets.  We're meeting today again to discuss how to connect with LibreOffice, and will talk about the concept of using hybrid PDF as our official City file format.  Right now LO is a bit clunky with this format, but we see possibilities I can start creating feature requests and possibly funding improvements.

Alfresco supports RSS feeds, so I have been building a proof of concept systray application which would alert users of changes to documents and work flow that need their attention.  In the shot below, the icon is sitting in the tray and clicking on the icon shows the last document updates.  At our meeting today we'll talk about this idea and whether we want to test notification popups too.  The strength of open source:  being able to rapidly build prototypes and then deploy solutions quickly with little to no cost.

It's only a few weeks away, and I'll be attending along with my coworker.  Find us and say Hi!