I haven't posted any new information for a while, but the City has been keeping me busy. Here are the things that I have been working in no particular order.

OpenOffice
I upgraded the whole City to OpenOffice 3.2 this morning. As I have mentioned previously upgrades are very simple when they are deployed from a centralized server. All I do is point the launch scripts to the new version and it immediately goes live. So far, no major support issues.

Firefox 3.6
We went live with 3.6 and so far everything is working well. Performance is good over remote display on multi-user servers. I have already started beta testing 3.7.

Evolution
Migration to the new Evolution has been slower going than I would have liked. We were running a developer build and have now synced to the official release. We found a few regressions and issues, and I sent a document which contains our show stoppers. Hopefully we can get this project finished soon.

Thin Client OS 2.0
I finished our internal "2.0" thin client operating system release and it's starting to be pushed out into widespread use. Another week or so, and I'll be comfortable deploying to our other 550 thin clients. HP released Debian Lenny, and I made all of the modifications required to better support our design goals. The major changelog items: + Increased USB stick supported files + Click sound when USB stick is inserted and removed + Upgraded NX client for remote sites + Graphical first boot which requests information about how thin client will be used and desired resolution and color depth + Merged Intel Xorg drivers + Support for 5745 thin client + Hard code 5735 thin clients to only work in our cyber cafes + Custom Largo splashy at boot + Support for SmartBoard white boards + Removed Xinerama and moved to xrandr. + Automatic shutdown in 3 hours of inactivity + Faster startups and shutdowns.

I'm very pleased with this release, all of our thin clients work with an identical Linux OS.

5745 Thin Client
Our loaner t5745 HP thin client is working *great*. I have started to move it around to regular users who are testing it with their own monitor hardware and their own techniques. Reports are that it's 10-15% faster than the 5725. Nice.

SmartBoard (Electronic White Board)
The new IT conference is finished, and we have deployed an electronic white board. The drivers and software works 100% on Linux, so I installed it in the 2.0 thin client release. That means anyone in the City that wants to use this technology just has to buy the right hardware. The picture below is the smart board mounted to a wall, running off a thin client. You can export these documents into PDF with just a few clicks. 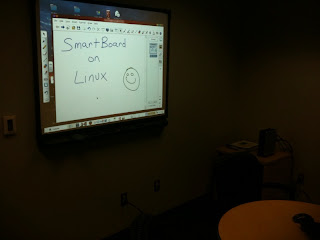 4410t Thin Client Laptop
I have gotten some time to work on the back burner project of adding a thin client laptop into our infrastructure. I'll blog about this in more detail in the coming days. I downloaded some bleeding edge Intel drivers which are buggy, but making progress in the design and work flow. I basically want to make it so that you just turn on the device and within a few seconds you are able to log into our network. I'm experimenting with how best to drop from wired to wireless to EVDO automatically. I'm not reinventing the wheel, just trying to eliminate applets and prompts and just work for our needs and network. Lots to think about.

The picture below is my testing of an EVDO modem, testing ideas on how to handle the phone number and when exactly it should dial. Our number one support issue on fat laptops is networking. 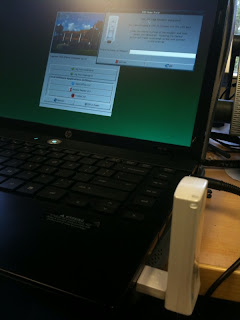 Of course one is always tempted to take apart something that is working fine and see what makes it tick. I have been running the new HP t5745 thin client at my desk for about a week now and it's working really well. Performance still feels about 10% faster than the older model. The Intel Xorg drivers are stable and fast, and I haven't seen any blinking or video problems. Looks like this one is a winner.

The inside is very clean. Memory, Apacer flash module and CPU take up the most space. 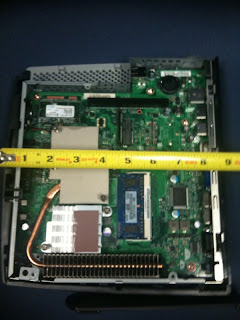 The front is well designed; microphone, headphone and two USB ports easily available to the users. 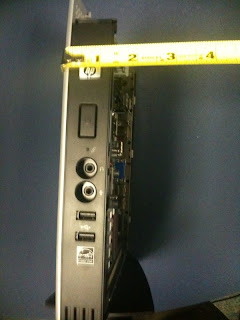 The back is clean, and offers all the ports we need. PS2 ports are appreciated to keep the USB ports clear for other devices. 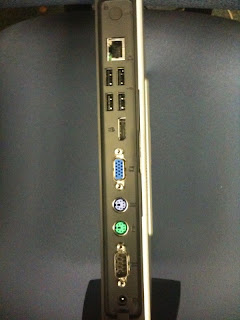 If you are considering a move to thin clients, this is the best model I have seen to date. With a 400 dollar price point, and anticipated 10 year duty cycle it's certainly attractive. Our 5725s are proving to be solid work horses with very few failures even after 3 years.
Posted by Dave Richards at 8:24 AM 10 comments: