Trucks pulled up to Largo on Thursday and Friday with multiple pallets of HP 5725 thin clients. We pulled 10 out of the pile and tested them to ensure that nothing had changed since our beta units. Everything looks great. All city employees will soon have far better performance and the opportunity to run 3D applications and the 3D desktop.

BigSur of Tampa will be assembling them next week, and IT Support will be placing them around the City at the various facilities. Everyone that knows me, knows that when I mention improvement areas I do so only to alert people about the things that make my job more difficult as an Administrator. It's always my goal for these projects to improve and market share to increase.

Last week I blogged about Cairo not working on 8 and 16 bit Xservers. We are still struggling with this issue as I do my best to implement new versions of software.

This has felt like a Monday as I struggle with printing. Techie people hate printers, and I am in that camp. We sometimes have a very hard time understanding why people won't just look at things on their computer screen. 99.9% of people have the opposite viewpoint. Unless software prints well, it's a failure. I cannot stress how much users love their printers and holding paper. Unfortunately, this important feature to users is the least developed and mature on Linux. We (and I group myself with all of you) just don't get it.

I have a brand new OpenSuse 10.2 server that I am trying to fully implement. Here is the current user experience with printing on this OS. I'm not picking on OpenSuse, because all of the flavors have the same basic problems:

1) I have blogged about this before. Here is how Acrobat looks to the users when selecting a printer. Note the white space in the widgets. Someone told me this was being fixed, but apparently that hasn't been built into new OS's. (shot of printer selection below) We have 60 printers and they have to scroll up through the widget to find their printer. 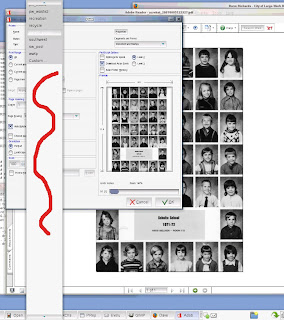 2) Sometimes people ask why I don't use Evince instead of Acrobat. Well, it's even worse. My bug report today indicates this is the new printer dialog, and now the report was pushed over to gtk+. First of all the printers don't display, and require users to enter their own printer commands (ack!). And then even if they enter the right command, it still doesn't work. The print job is stuck until evince is closed. (shot of new dialog below). And because of "internet time", even if a fix is made in the most recent library versions, I'm stuck with no fix for OpenSuse 10.2 because it's too 'old'. 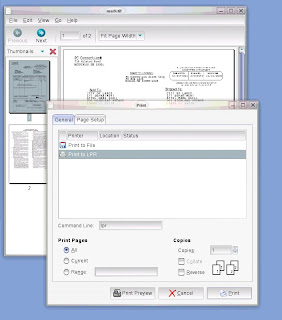 3) So why not use eog for these tiff images right? Well firstly it won't load multi-page images and on OpenSuse 10.2 and SLED 10 it prints the first page as a solid black box. (shot of output of tiff black output). This is how images print from Evolution as well, it's not just a eog problem. 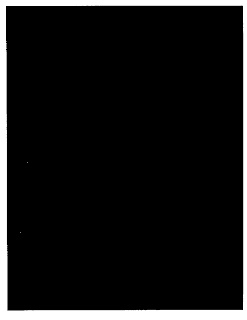 4) And the user experience is made worse by the fact that some operating systems make the default printer the default for all users. The printers don't "stick" and have to be reset each time they print...making them go through all of the bad dialogs mentioned above. (shot of yast2 setting a system wide printer for *all* users). 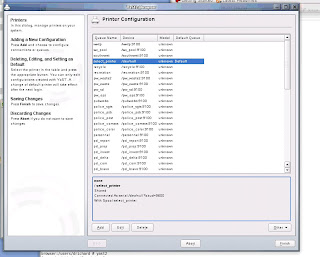 5) When you print a calendar from Evolution, it doesn't print the "Location" which is the second most useful piece of information. Many power users print their daily calendars and walk from meeting to meeting...but have hand write the location information on the printout.


I have been having some conversations with the Tomboy and Evolution developers about adding additional printer options and hope that all of the projects consider this in the design. If you want to earn the love of users, make them print well and with many options.

[ Update ] The evince developers showed me how to build evince using the old style printer dialog, and now that's working. Turns out that the cups backend is not enabled on the new printer dialog on OpenSuse 10.2. It's a compile time option and is set to file,lpr instead of file,cups.
Posted by Dave Richards at 1:26 PM 36 comments:

When Major Problems Are Left Open

There are a lot of developers out there, and I certainly understand that everyone is busy. I'm sure that everyone perceives that their bugs are important, but in some cases certain issues should be blockers and resolved. It's always fun to work on new features, but I sure would trade those features for stability.

At some point GNOME started using Cairo...which fails to support 8 and 16 bit color depth on Citrix Metaframe for Unix Xservers:

I entered bug reports April of 2006 and then again February of 2007 and here we sit. We are finally at a point where I can't keep older versions of operating systems running and *have* to upgrade. I have to check color depths when users launch applications in GNOME and for these 2 depths I have to use xmessage for the dialog because zenity too won't work. Not cool. Support is having to alter settings in devices and take support calls and in some cases we will have users that have a few applications that are down until our new thin clients arrive.

Can we get some love in these areas so that we get back to what worked fine 5 years ago?

[Update] Research and checking the bug reports have indicated a lot of people having these types of problems. This library should not have been pushed into GNOME until it was ready. These aren't minor issues!
Posted by Dave Richards at 3:05 PM 34 comments:

It Doesn't Matter If I Can Use It

My blogs over the last year have been mostly technical, and *my* thoughts and usage of technology. But in a way, it doesn't matter if I can use it. Without users, there is no need to have System Administrators. It's my job to act as a buffer for the users, and try and monitor changes in technology that are fits for a business environment.

We have about 10 people using our new thin clients on a 3D desktop, and they are having success and enjoy the experience. So I wanted allocate one blog to talking about *real* people. These are users that do not care about technical issues, and just want to get their work done on a modern computer network.

The picture below is of Linda. The Executive Secretary for Management Services. When I walked up she was testing the new Chart2 module in OpenOffice and learning how it works. She is a heavy Evolution and OpenOffice user. 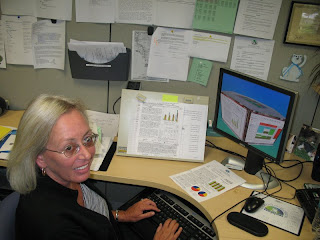 The picture below is Sandy, the Executive Secretary for the Fire Department. She heavily uses Evolution and OpenOffice. She is in the process of merging multiple documents into a massive Master Document so that an automatic table of contents can be generated. She also gains access to a few Microsoft Windows applications via Citrix. 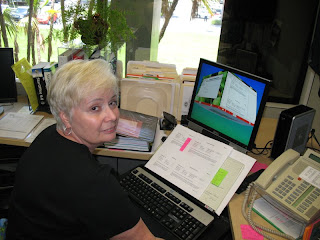 The picture below is Jo-Ann, the Executive Secretary from Human Resources. She uses Evolution and OpenOffice very heavily as well. 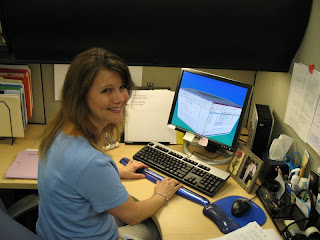 These 3 people, along with the other testers have provided me with invaluable information and suggestions about little things that can be done to improve the desktop experience. So today, my hat is off to them.
Posted by Dave Richards at 2:46 PM 4 comments:

We have a weekly publication called the Monday Morning Briefing that is pushed to desktops each Monday. When you log in after a new one has been published, it opens immediately in Acrobat Reader. Needless to say I'm not in favor of this intrusive window, but lost the battle to people higher in our City org chart. When people sign your paycheck, you do what they say. :)

I'm experimenting with a method to extract the first 2 pages of the document and putting it on the top and bottom of our 3D workspace hexagon. People would then see it when flipping between views and could flip it down to read the content. I built this prototype with OpenOffice. I created a custom paper size of 11" x 11" and then simply exported it to PNG format. It needs some work to make the fonts easier to read, but I kind of think it makes good use of that real estate.

Those handling the merge of Beryl and Compiz, please make sure the ability to put images on non-cubes is pulled from Beryl...this is a very useful feature.

We are up to 10 fulltime 3D users and things are going well. The biggest thing that people struggle with is the concept that increasing the number of workspaces up from "1" actually gives you multiple hexagons. The big order of 560 new thin clients is expected to arrive on 6/18. Things will be very busy around here deploying that much hardware....the first time in 10 years we have touched desktops. 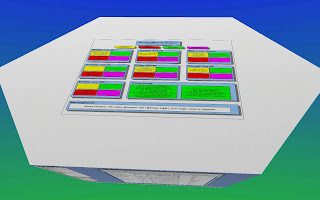