Once again it's been a while since I blogged, but I have been keeping very busy.

Zimbra has been running very well, and aside from a few bugs the migration has gone well.  On June 15th, we completely disabled Evolution and Groupwise.  We had been on Groupwise since 1994 and used Evolution for many years. In recent years we just could not elevate these products past nagging bugs, even under a support contract with Novell.  So with mixed feelings we have now moved to this new software.   I have seen some blogs about the future of Zimbra, and it seems very bright.

We are having one nagging issue with Firefox.  For many users (including me), about once a day it just closes/crashes.   I have been looking for a pattern or trend, and it seems to happen when a page is about to be displayed during a refresh; but not always.  The normal crash dump screen never appears with useful information.  I put a running FF instance on gdb, and it finally crashed.   However, it's crashing with a SIGKILL for some reason which so far alludes me.  Does anyone know why it would stop with SIGKILL?  I looked at the logs and this doesn't appear to be a OOM type issue, the server is running fine and not overly loaded.  Nothing appears in the logs at all.  Is there code in FF that tries to shut down tabs that are running slowly, and maybe this area is buggy?  Any ideas on how to get a proper crash dump with this signal?   If I cannot find it, I'm going to start upgrading various pieces including the underlying operating system which is OpenSuse 11.4.

I have been working on setting up an instance of Alfresco for the IT department to use in the coming months.  We built a sandbox several months ago for a demo and decided to proceed with this pilot project.  Version 4.2c installed easily on Ubuntu Linux and was up and running pretty quickly.  I was able to figure out how to get user accounts in LDAP to auto-provision, and am shaking out what appear to be bugs in LDAP group syncing.  Once you get used to the design of Alfresco for housing documents, you can see the power of the software.    The web interface is very clean and customizable. 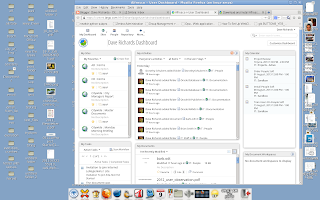 There is an application for iPod/iPhone that connects to the database and displays your content on that hardware footprint: 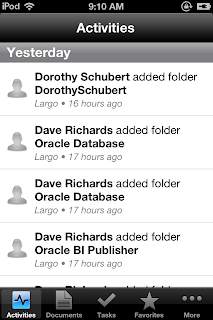 And they have an application for iPad tablet footprint too: 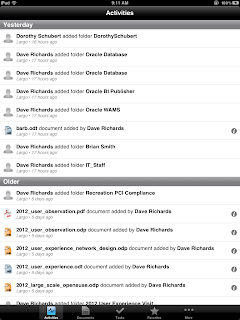 So right now we're testing the workflow and taking steps in the direction of moving our IT content into this data store.  I have some ideas for ways to integrate Alfresco with GNOME and will be blogging about that in the future.

We have hit one small snag with LibreOffice, with workaround.  This issue is relevant with OpenOffice too, and it's a bit unique to our setup.  The new SVG rendering engine is VERY slow over remote X, which mostly impacts users Impress slide shows.  Presentations that used to open in a second now take much longer.  The workaround is to open the presentation and save the background in PNG format and then it works as expected.  Not a very good end user experience.

As part of the Alfresco project I have been testing CMIS connections from LibreOffice, and they have advanced a lot since my last review.  Within the file picker, if you select the Alfresco connection it asks for a password: 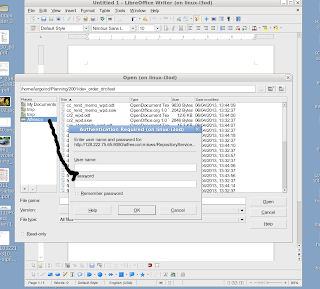 Once you pick a file, it now asks if you want to check the file out: 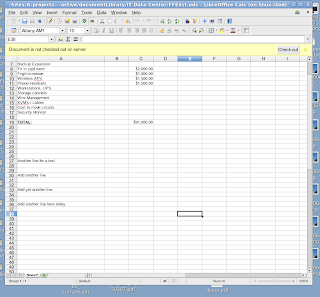 And when you are done, it asks if you want to check it back in again.  It also allows you to enter a comment. The document version number is incremented and this comment appears inside of the web interface. 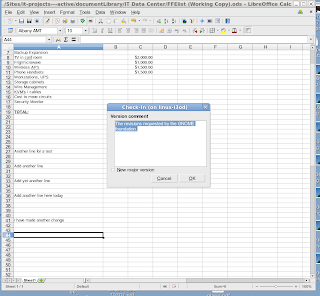 I put a few beta testers on LO 4.1 to check out the new side bar code.  This is "experimental" at this point, but looks like it will be a big hit with our end users when it's released for LO 4.2.  Very cool. 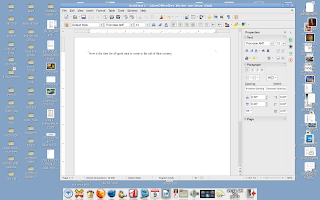 Other projects: Patches and upgrades to install, already a new Flash upgrade to QA and deploy.  Continued Alfresco work, setting up software for our support staff to put users into LDAP groups with a single click.
Posted by Dave Richards at 9:59 AM 5 comments: