I haven't blogged in a while, but have certainly been busy. I did take off a week for vacation and had a nice time with friends and family and visited Cedar Point in Ohio to ride some roller coasters.

My current R&D project continues- I'm getting a new Linux operating system upgrade ready for our 550 thin clients. There were a few features we wanted to add, and we also wanted to be able to support the new 5735 thin client that replaced our model. I took the HP released Debian Etch flash build, and have been adding in our customizations. Both old and new thin clients are running the same build, and have identical features. I have Xinerama working for 2 or 3 monitors in both NX and XDMCP. 1 monitor continues to support Compiz/3D desktops.

A few ideas that I had for the new 5735 model will have to wait for the next upgrade. The ATI X1200 on board cards are not supported in Etch, and seems to need the radeon-hd package. The 5735s ship with both PCI and a PCIE/x1 expansion slots. So we bought an ATI 2250/x1 for testing. This card too requires radeon-hd. So some back burner ideas for the future. :)

The latest news is that HP released some thin client laptops and we got a loaner for testing. I had to install Debian Squeeze/SID in order to light up all of the hardware including an Intel/4500 video card. I then wrote all of the custom scripts and code to support this hardware as well. All 3 thin clients now work identically from a common code base and it's just awesome. We are kicking around the idea of allowing some employees to use the laptop footprint instead of the desk model, which would allow them to carry it around the building and use it anywhere. I also have experimentally installed local copies of OpenOffice and Acrobat Reader to allow a (very) minimal amount of off-network work. If someone needs to do a presentation off-network, it will work fine. The details are still being kicked around, but it's looking promising. The thin client specs. With a price tag just over $500, they are pretty attractive.

All 3 devices boot to the same system chooser menu (below). The laptop is especially fast and gets here in about 10 seconds after pressing the power button. 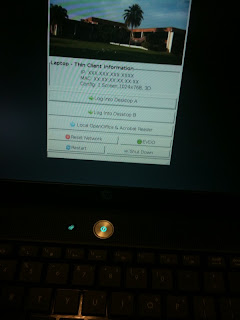 I have scripts to automatically figure out if you are on the hard wired network in which case XCMCP login is started. I haven't gotten 3D working on this Intel driver yet, but that's my goal. If they are not plugged into the city network, or on the wireless card it automatically starts NX and they can get the same desktop. I have been walking around the City Hall building and it's all working really well. 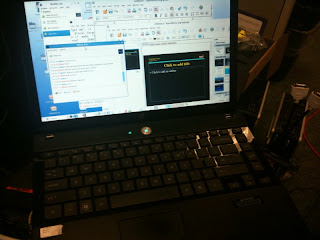