The Road To Seamless Windows

While we do run a lot of open source and Linux software, of course there are still some applications that run in Microsoft Windows. I personally don't work on the Windows side of things, and it's handled by the other System Administrator.

The launch scripts to run these applications are mature and work well. In the last year we made some changes mentioned in previous blogs in regards to using Rdesktop running on the thin client itself, along with allocating some thin client RAM for video cache. All of which have made the applications run virtually the same speed as they would on the server.

The last technological feature that was always on the radar was running them in a seamless window. This is the opposite of how it worked previously; a container would open and the software was sitting inside of this space. This design wasn't terrible, but disallowed users from having all of the resizing capabilities that they wished. A new version of Rdesktop (1.7.0) was just released in the last week or so and the Windows administrator spent some time testing it once again. Previously there were some stability problems when running seamlessly, and it would sometimes crash. It never felt ready for daily and enterprise use.

He tested Rdesktop 1.7.0 and felt it was very stable and would work well within our deployment. The next obstacle was that the HP thin clients are running Debian Lenny and no backports of Rdesktop had been done and possibly never will take place. So we built a VM to run Debian Lenny with full development tools and libraries. This VM image will be kept for future projects that might arise. Rdesktop was compiled cleanly and then we moved it over to the thin client manually and installed the binary and libraries and everything worked. I spent some time this morning rewriting the rdesktop launch scripts on the thin clients to understand the desire for a seamless window and use the appropriate flags. Rdesktop is a bit twitchy about the order of the arguments and this had to be tested and QA'd.

So after less than a few hours of work, it's now ready for release to our beta desktop users. Once stress tested, this technology will be pushed to the rest of the City. In the shot below, you can see Internet Explorer running in a seamless window, tightly integrated into the Linux desktop. A single click of an icon in avant and you can be listening to Steve Perry in just a few seconds. ;) 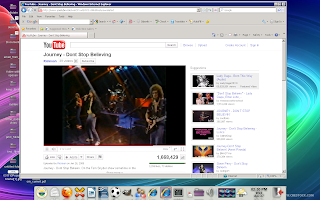 There is always a period of time after you requisition hardware that you are a little nervous about performance. Very happy to report that Firefox is scaling very well and we have jumped over the magic number of 100 concurrent users in FF.

The only open issue right now in regards to Firefox is that it still is having an occasional oddity in regards to NFS. From watching patterns, it seems like if you are downloading a big (1GB+) file and writing it over NFS, the server get's sluggish. It never comes to a crawl, but has a noticeable slowdown. I was able to make this work better by downgrading from NFS4 to NFS3. I'll see if I can figure it out and submit a proper bug report.

The shots below are 100 concurrent FF sessions. Not everyone is surfing at the same time, but it still shows the memory usage along with CPU for maybe 30ish active sessions. Very happy to see Flash not multi-threading. :) I believe this server could easily handle another 100 users, and can easily be upgraded in terms of RAM. 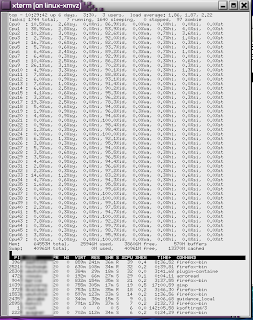 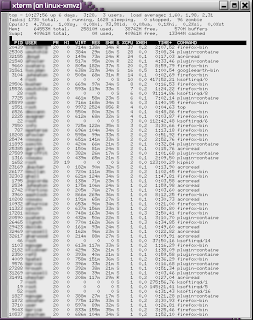 A Word About UI Design And Artwork
I have always been a person that shows screenshots and mockups when blogging. I find that when I read other blogs and can't see a picture, I find myself wondering exactly what they are describing. From time to time I get comments about how the UI "sux" or that the artwork is "terrible". I wanted to make a few comments; I never take it personally, but what really helps me is to make your own mockups and post them for me to see. I'm not an expert, and sometimes people have made some excellent suggestions. The other bigger comment is that being a Government agency, if we had an artist doing all of our icons and if we spent hundreds of hours working on UI design - as a taxpayer that would be disturbing. If we had that many hours to work on software and art, I would consider us over staffed. I always try and reach a balance point where the UI works and is functional, and always try and use existing artwork that others have created.

Ipad Portrait Portal Screen Finished
After meeting with some test users, they approved the initial screen and I have finished all of their changes (and it didn't take me 100s of hours :) ). The biggest change was that in the prototype the UI was blocked until all of the thumbnails were finished. Once they approved the design, I rewrote that code to not block the UI while the documents are being thumbnailed. In the shot below you can see that it finds all of the documents (in about 2 seconds) and displays the clock/busy symbol on the thumbnail and then fetches them while leaving the UI active. Previously 30 document so would take around 25 seconds to complete. Now the user can start working immediately. 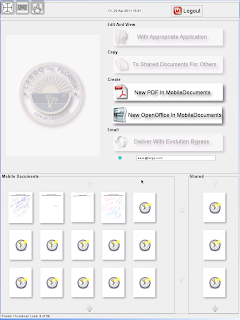 Remote Logins with VNC and NX
I am still testing various remote connection software on the iPad and as I mentioned the VNC Software called Remoter is working very well for us. The developer has been very open to ideas and the response time over VNC is crisp and instant. When I touch the stylus pen to tablet running Xournal, the pens and markers are as fast as a local computer and very fluid. The next step is to work with our networking and security guys and get this working from the outside so that performance can be tested over EVDO and Internet connections.

Concurrently, the Nomachine guys have released their next alpha release of NX which finally supports iPads. The software continues to have an excellent design and installs easily, but the iPad and browser performance still suffer in comparison to using a native client. My testing indicated about half the speed of VNC. While promising and interesting, right now it's not something that could be deployed. Hopefully performance will improve during the beta and release candidate stage. We certainly have no objections to a native client for iPad if it's faster; even though it would require installing additional software.

Ipad Landscape Login
The Xsession file is configured so that if you log in in portrait mode the above UI is used, but if you log in in landscape mode the server thinks you are just a regular 1024x768 device and gives you a full desktop. There is a bug in shinyswitcher in avant-window-navigator that causes it to crash when using VNC/NX and they guys on #awn are cooking a patch. Response time is excellent over VNC and it's a very usable roaming desktop with plenty of real estate. Around 50% of our LCD monitors are still 1024x768 so this resolution is still fully tested and QA'd and it's working great on the tablet. I'm pondering some ideas right now in allowing users to grab control of their already running desktop from the tablet. That should prove interesting.

Servers Are Offline
In this case, that's good news. The old NFS server and browser/Firefox3 server have been powered off after running as an emergency backup server for 1-2 months. No problems with all of the new 64bit servers and things are running very well.

New GNOME Desktop Deployment
It's always a challenge to consider how much information to give users when you deploy new software. Most don't read what you send them, no matter how carefully crafted. I have noticed that when sending email they will read a bulleted message with very short explanations versus long paragraphs. I also have found that boxed, quick concise snippets of information will catch their eye. So with that said, the document below is the current handout that is being readied for the upgrade. 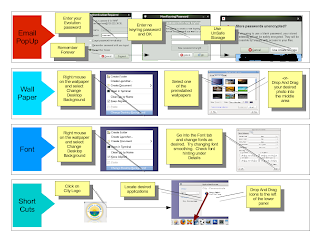 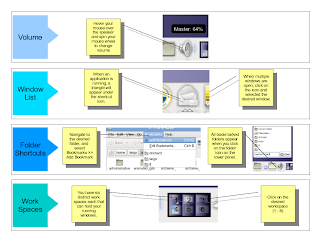 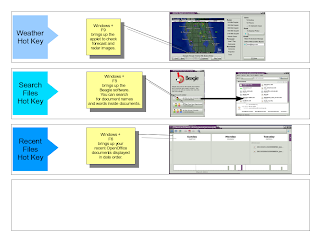 I was off for almost two weeks, the first time that I have taken an extended vacation and it sure helps recharge the batteries. Some things took place in my absence and this week has been super busy.

Groupwise/Evolution Replacement
While I was on vacation the IT Director and Infrastructure Manager continued to review options for moving email into the cloud and met again with Google. There are a lot of considerations concerning security and bandwidth and based on all of your comments many you agree that deploying email and calendaring to hundreds of users is never pleasant. :) The IT Director has not been satisfied with milestones in regards to Evolution improvements. Evolution is a work horse for us, thousands of messages a day go through and for most people it runs 8 hours a day. But those with more messages and huge calendars seem to have more crashers; and these people tend to be in management positions.

GNOME Desktop Upgrade To OpenSuse 11.4
Everything was working very well on our beta desktop server running OpenSuse 11.3 that it was tempting not to upgrade. But we decided that we didn't want to be a version behind when pushed to all of our users and performed the upgrade. For the most part all of our customizations came forward and after installing the new desktop-agnostic I was able to sync avant-window-navigator with newer code. A few addon programs needed some changes and patches and we now everything is running as it did before.

The one oddity that I have seen is that gsf-office-thumbnailer now creates thumbs with transparent backgrounds. :\ Does anyone know why this was changed? Possibly to make it blend in better with themes? It's really not working well for us. Users use the thumbnails all the time to locate documents based on the first page.

iPad Testing Continues
We are still finalizing ideas and a scope of work for exactly how to use iPads as thin clients on out network. After meeting with a few end users, a few minor changes were requested to the UI and that's almost done. We should be able to allow some limited testing of these ideas in the next 1-2 weeks. There are opportunities for very real dollar savings by decreasing printing costs.

GNOME Shell
Now that it's out, I'll spend a bit of time testing it again over remote display. We also have some Intel based thin clients (HP t5745) which might produce different results than the ATI models. Initial testing a year ago did not demonstrate this to be a viable option for us.
Posted by Dave Richards at 10:14 AM 3 comments: