One of the things that has changed since our first thin clients were deployed 10 years ago is the desire to plug in USB memory devices and gain access to them from City applications. After considering various ideas, I have finished implementing this on my experimental SLES 10 device. The biggest issue that we face is different skillsets and the propensity of people to just turn off devices without dismounting them first. NFS mounting would have been a nightmare for that reason. The technical hurdle is that the USB ports are on the local thin clients, yet Nautilus and other City software runs on the server. I wanted to create something as stateless as possible. My solution was to set up a user called 'usb' on the thin clients, and start up vsftpd and jail that user into the /media directory. Ivman then picks up devices, mounts them automatically. Nautilus has the ability to add a 'Place' that is a ftp connection. The end result is a file manager that appears to the user to be working locally on their device. It also in theory would allow users to share files to USB memory sticks to users in different buildings. (On my wishlist: ftp connections from F-spot).

The images below show how it works; (follow my blog link if images do not appear).

[ The usb camera is plugged into thin client. Ivman sees the plugin and mounts /dev/media. Nautius is running on the server, and ftp's over to the thin client and sees the mounted memory sticks or cameras ] 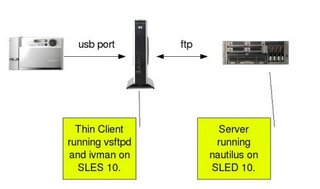 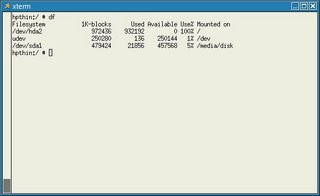 [ The most important issue, transparent access to these files for the user. This looks no different than it would if they were on their own computer. ] 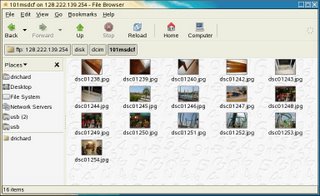 Still struggling with poor SiS video drivers in SLES. Next up, working networked ESD to get sound from the server.

HP has officially added this product to their website.
Posted by Dave Richards at 3:33 PM 4 comments:

Between work and buying a new house, I have been very busy the last few months. It was nice to get out of town for a few days and head up I-4 to Orlando. I've gone on a lot of roller coasters around the country, and the The Hulk at Universal is definitely my favorite. I thought I'd share some pics of what it looks around Florida, and the coaster itself. [follow link to my blog if pics don't appear] 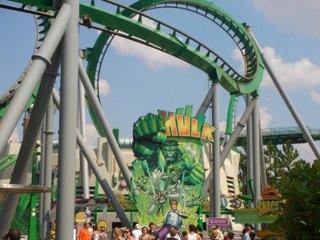 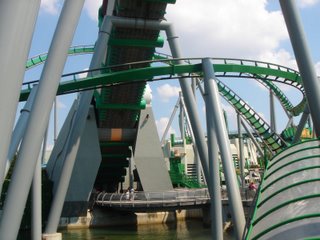 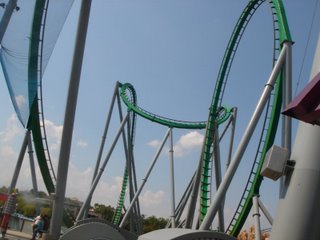 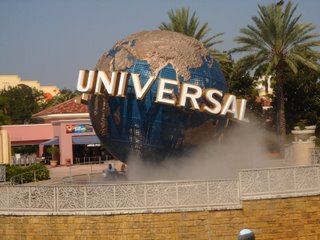 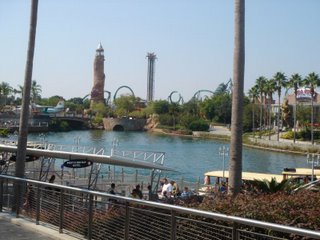 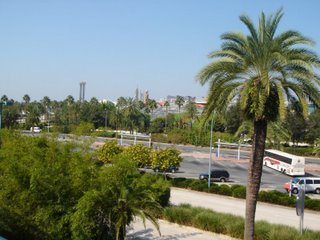 Posted by Dave Richards at 9:18 AM No comments:

Concurrently with all of my other projects I still am working on building a working prototype of a SLES based thin client. We are going to be buying around 500 devices, and I want to make sure that everything works before we make the purchase. Getting SLES on 1 GB flash device has been a challenge. I was able to finally get an install down to around 950MB and it loaded. My first test was with reiser FS, and I found it not a good fit for a thin client. Users often just turn off devices, and it was taking a long time to reboot after such an event while the file system cleaned. Ext3 has been working better. Identical packages take 40 seconds to boot with Reiser, and 33 seconds to boot with ext3. Interesting.

I have hobbled together a working prototype, it boots and starts X and presents a chooser for XDM and Citrix connections. My first chooser screen was done with Zenity for testing, and now I used Glade to create something a little nicer looking. [ Shot below ]. I'll get that installed on the boot image next week.

The devices have a SiS video card built in, and the driver isn't working well past 1024x768. There is a lot of screen flicker and blackness flashing on and off. More testing will follow in that area.

Next up is adding the PCI bridge and testing with 3D video cards to see how that works. One wishes for more hours in the day! 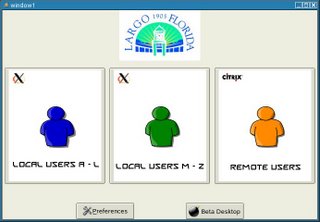