One of the misconceptions about deploying multiple people on a server is this thought process:

"If I am on a computer by myself and sometimes it's barely adequate...how can it possibly work having hundreds of people sharing a server?"

We hear this over and over again as we talk to others and explain our technology. I think they assume that you divide the CPU speed by number of users and that somehow gives you your time slice.

In fact, once people see the speed of the software running at Largo, they are amazed and often say it runs faster than it does on their PCs. There are a few reasons for this:

* The servers are obviously bigger than any computer you would have at your desk.
* Even if you have hundreds of people on, at any given time only a fraction of that total is actually using the software.
* When you have enough memory to hold everyone in RAM, there is no swapping at all.
* You never really have a cold start of software. It's always running by someone else in the City.

I thought I would show a few 'tops' to demonstrate how well Linux handles multiple users. I think we could easily get 2-3 times more people on these servers if we had to do so. The most interesting thing to note is the CPU usage. 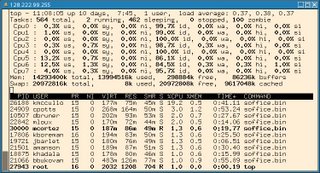 This shot is Evolution 2.6, 180 concurrent users at the time: 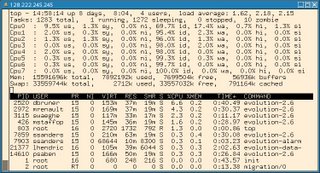 This shot is Firefox 1.5, 48 concurrent users at the time: 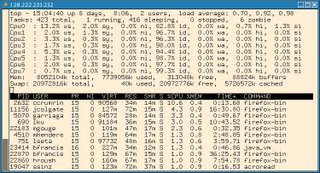 SLES 10 On A Thin Client

The City of Largo is doing some experimental work with testing SLED/SLES on thin clients. Our 10 year old devices are at the end of their duty cycle, and we need to buy new ones to run for the next 10 years.

We want something that can be upgraded to some extent and that we can customize to meet our needs. I was unable so far to get SLED 10 to install because of flash drive limitations, but finally was able to get SLES 10 to install and X to come up. [ Shots Below ]. The devices are from HP and have 1GB of flash disk, and 512MB of memory, and 1GHZ CPUs.

SLES forces you to install some packages that aren't appropriate for a thin client, so next up for me is to delete everything we no longer require. This should reduce the boot time. Then, I'm going to try and install a few things by hand and get it to start X and present some kind of chooser for XDM and Citrix connections.

The next step after that will be to install the optional PCI bridge and try and install a 3D video card and experiment with using Xgl from SLED 10 servers over the network.

A great Friday project, and successful even. 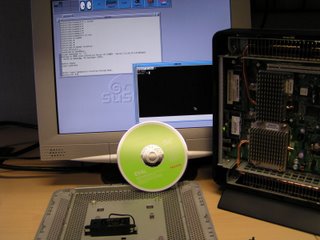 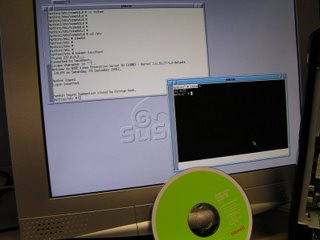