Changes To Portal, And Data Mining

It's an aspect of my personality -- I love data and finding new ways to analyze it.  In the case of our GNOME implementation I want to see exactly what software packages are being used and by whom.  There are two benefits to this:  1) being able to focus on the software packages used the most  2) Being able to reach out to users when data indicates they might be having problems.     Very often in a corporate/enterprise environment users will not call for support and their frustrations will grow, so our support portal has given us the ability to proactively make contact.

In the last few set of updates that I pushed, the "Usage" tab of the portal has been implemented and is now providing interesting data.  The UI and buttons still need some alignments and work, but the data is there for viewing.  On each refresh cycle it's now counting all clicks for the day and sorting them into the top four categories.  And then underneath these categories it's how showing the top six users and their number of software clicks/launches.  In the case of LibreOffice this might just mean they are editing a lot of files; it also might mean they are having a problem.  In the shot below, I can now see the number of launches of "Evolution" for instance (marked in green) and then the blue shows the users underneath.  There were some users with lots of launches and one of them is having problems with quota.  The other user seems to be working in a manner of only opening one software application at a time and closing it before opening another.  We are reaching out to both employees and offering to help.   With these most recent changes, I've reached a milestone now where all features that we wanted to add are now complete and I'm moving to other projects. 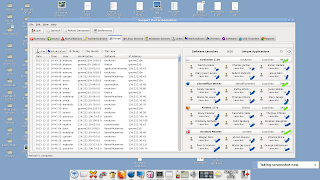 Projects:  Tomorrow we are working with a vendor to design and implement a LDAP server, and then will be connecting it to our Zimbra install and testing this type of authentication.  Once that's in place, I'll connect it to Alfresco for similar testing.  I also will be working again on the Ubuntu thin client updates for our workstations.
Posted by Dave Richards at 3:09 PM

Great and useful blog. Creating content regularly is very tough. Your points are motivated me. Excellent blog after reading this I am impressed a lot.
http://www.erptree.com/course/oracle-fusion-hcm-technical-training/