The week has been busy and it's only Tuesday. Here are updates on my current projects.

OpenOffice
Migration to 64bit Linux is complete and things are working pretty well. Even with 100 users, OOo opens in about 2-4 seconds, nice. I was able to confirm that indeed there is a nasty memory leak when using the Start Center and have submitted a bug report and valgrind information. The short term work around was just to install enough memory to cover the leak. Hopefully someone will be able to look at it soon.

Evolution
We migrated the rest of the users to SLED 11/SP1 and things appeared to be working well initially. We then started getting reports of Evolution crashing during peak loads. After some investigation it was determined that we are having the same problem that we did with OpenOffice -- having too many people to run the 32bit release. You basically run out of 'low' memory even though when viewing 'top' you perceive of no memory problem. When low memory is exhausted, it begins picking processes and zapping them with oom-killer. I have the servers configured to make them super easy to migrate, so we downloaded 64bit SLED 11 and it's already installed and working on another box. I'm testing Evolution and mime types, and all we have to do tomorrow is just backup /home for everyone and move it over and change IPs. Everyone then instantly is on a new server.

Benchmarks & New Server
The one area of our computing infrastructure that is growing the fastest is the use of Firefox/browsing. More than ever it's being used for data retrieval, videos and downloads. We also are purchasing some new software that might make heavy use of Java and we wanted to ensure the best possible performance; so using budgeted monies we ordered a new server.

The new server finally arrived this week. It's got 8 CPus each with 6 cores. I took a shot of 'top' below so you can see what it looks like. I had to pick 6 point font just to get the CPUs all to display. :)

One of the things that we do when these new servers arrive is hook up with our good friends working on OpenOffice and give them a chance to try and set a new compile world record. This is done before the server is placed into production and when they are finished we move it inside our firewalls and reload the operating system. So in the coming days, hopefully we will get some interesting information concerning just how fast this new server runs. 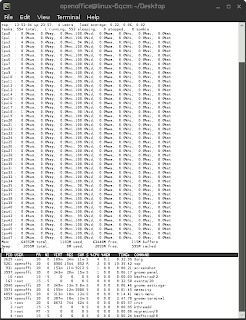 So this week we deployed OpenOffice on 64bit Linux for the first time. It's smoking fast and works great especially under user loads; however it's chewing up LOTS of memory. It seems to be using easily 3 times more memory. I have been using lsof to check the documents that the users have open and they are nothing out of the ordinary and some of them are just a few pages with no images.

Anyone have any thoughts on this matter? Could it be leaking this badly? This type of memory usage is not sustainable; so I guess that means I'll have to start looking for it by process of elimination. Possibly it's user settings of some type. Very odd. 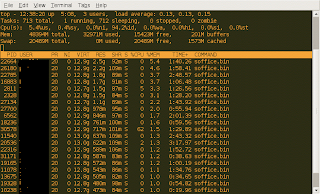 Evolution 2.28
Those of you that have met me and communicate with me know that I'm pretty fair in describing good & bad experiences in working with technology. The road upgrading from Evolution 2.6 on SLED 10 to something newer has not been very fun and took 1.5 years, which is WAY too long. There were a few times in recent months where we had meetings and discussed moving to completely new solutions. We are using the Groupwise backend with very heavy calendaring and had a minimum level of features that we wanted to get included and working. Sometimes I still get the feeling that Linux vendors are somewhat caught off guard when you *REALLY* run desktop software not on MS Windows. Evolution is by far the best solution to deploy on Linux over the Groupwise Java client (which is absolutely horrid), and the web interface. I just wish that more resources were allocated to its advancement.

With SP1 of SLED 11 enough upstream patches have been merged that our features are working well enough to deploy. It's not perfect and some bugs remain, but users can perform their calendaring functions including meeting resends and retracts. I will be moving over the users to the new server and then doing a bit of QA testing on their accounts to ensure that everything is working. 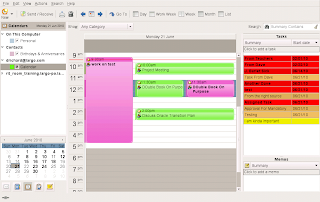 OpenOffice 3.2.1 On 64 Bit Linux
We had an issue last week whereby hardware is failing on our production OpenOffice server. As luck would have it, the replacement computer had already arrived and was sitting on the loading dock. I did a review of all of the packages that we needed and determined that everything was available in 64 bit versions. The server was quickly built and will be put into production this week. Openoffice on this server is FAST. The composer UI of Writer is appearing fully rendered in about 2-3 seconds, and running so quickly that the splash page doesn't even appear at all. Very nice, and thank you to everyone involved with making my job easier. :)
Posted by Dave Richards at 9:48 AM No comments: