I live very close to downtown Safety Harbor Florida. It has a very small town feel, and lots of people walk around at night and window shop and sit in the gazebo. One business had the idea of running electronic slides in their store front. Too bad they didn't know they could run Linux. :) (pics below). 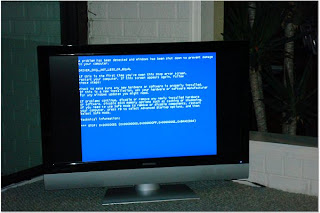 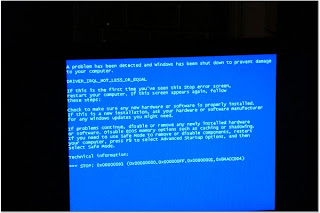 I'm prepping the Compiz-Fusion machine for city wide deployment and working on feature requests that we had on the older GNOME desktop. Previously, our support staff would use x11vnc and vncviewer to support users that are having problems. We have had requests to allow anyone in the City to use this capability. I wrote a small zenity and python front end and now employees can grant access for viewing, and also remote control other users desktops. Months ago when I did testing, Beryl didn't work well over VNC. I brought down the latest version of x11vnc and it's working much better. One can remote control another 3D desktop while using your own. (Shot below). Now, does this give you a headache or what? :) 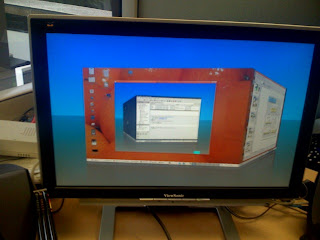 I was on vacation last week, and got right back into my projects this week. I had movement on many fronts, most of it good.

Evolution: Now that all of the users are live, we have been shaking out some bugs/issues and possible regressions. We don't use the keyring, and the dropback code code seems buggy. It's asking users for passwords in a manner that is not repeatable. We are also getting some EDS crashers for those with heavy calendars and those that proxy often. SR's entered and working on reaching a better milestone.

Compiz: Interestingly, I'm finding the 3D desktop is really increasing my requests for beta testing accounts. Normally, users are very slow in moving to new technology and this seems to be exactly the opposite. Cool stuff. I experimented this week with the widgets layer and video plugins. When the widgets layer is enabled and you press F9, applications that you have configured to sit in that layer display. I wrote a very simple python/Glade UI to display our current local weather. I configured all Compiz sessions to put that new UI and a clock into the widgets layer. So now all users can press F9 and see the local weather. (shot below). It would be great if someone wrote something a little more polished :) These images are statically named on weather.com. 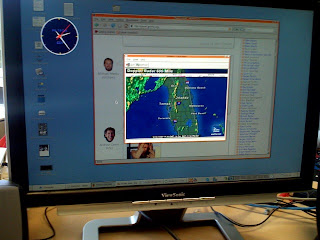 Thumbnails: Kevin DeKorte wrote some great programs that work with mplayer and has been a big help in making some changes. I am using his nailer program to generate thumbs for video clips in Nautilus. I had 2 real world issues that most thumbnailers forget: 1) Sometimes files that users have downloaded or saved are incomplete or damaged, the thumbnailers have to account for that fact. 2) Sometimes a thumbnailer will get a file and lock/spin and not be able to generate an image. They need to have a timeout and give up after a few seconds. I had to turn off the evince thumbnailer for this very reason. You can't have hundreds of stuck processes on a server.

Mplayer: A patch had been posted on the list to use pulseaudio with mplayer. The current SVN version is still looking for the older polyp libraries. This meant it failed to find the libraries and fell back and used ESD. While ESD works with our pulseaudio daemon, this is definitely cleaner and works great. I also found a patch to have mplayer work with the video Compiz plugin. However it seems not to work with remote display, and will require more investigation. The video plays all blue, similar to how XV looks when you move focus away from the window. I put back the XV build and will continue using that until I figure out the problem. I moved mplayer into production today and we shipped forms to the users for signatures to gain access.
Posted by Dave Richards at 2:33 PM 2 comments: