I have been making progress on the next thin client release.  Right now I'm tinkering with Xorg.conf and deciding on the best way to deploy.  The 5725 model is a combination of SiS and ATI, and the 5745 is Intel based.  All of them have slightly different ways of building files for multiple screens.  I also am looking at the concept of supporting three and four monitors, and trying to work that into the mix too.  Google Earth over remote display had some issues with some of these modes and I'm having to do some trial and error testing.   The drivers have changed slightly from the older Debian release, so it's a learning process.

We also have had more and more people taking pictures on their phones and tablets, and I'm looking over the ways to mount these devices that do not go into normal USB mode for transfer.  We also have the issue where users plug these devices into USB ports to charge them; so I'm adding an option on the UI to allow them to use the ports for power only and make no mount attempt.

Touch screen monitors have dropped in price greatly in the last few months.  My perception this is happening because they are gearing up for Windows 8.  So we bought the new HP model (under $300) and it worked right out of the box by just fooling the OS into thinking it's a mouse.  There are some use case situations with touch screens and POS software around the City, and we should be able to support them easily.

We were contacted by OpenText based on our desire to have a solution for iPads presenting the GNOME desktop.  I installed their Exceed on Demand server product and indeed it allows you to connect from a tablet and GNOME came right up and worked (shot below).  It does bandwidth compression and a quick test over EVDO showed it to work as well as RDP/Citrix/NX protocols.  The server piece was tested on a sandbox VM of our GNOME server, and I'm in the process now of moving it to the production machine for further testing.  The production machine is running on real hardware and is much faster, so the results will be interesting.  It's very usable over both Wifi and EVDO and typing and movement is crisp and fast.

Other projects:  Apparently ProjectLibre has replaced OpenProj...so testing that in our environment.  Still have some LibreOffice patches to install, trying to get those scheduled.  Looking over OpenLDAP as a way to reduce some of our password entries around the network. 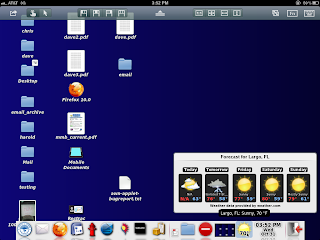 Posted by Dave Richards at 1:38 PM

Why do people want to use a Gnome desktop on an iPad? Why not let them use apps like Pages that are designed for the iPad and can access documents in the cloud?

@anonymous: There are two different issues. Files and software. Files will go through a document management system and that's the easy part. The other aspect is software. There are applications that need a certain version of Firefox, or certain version of Java to work; won't work in Safari. We need VT220 emulation, 3270 emulation and there are lots of specialized software applications that need Microsoft Windows. Many software vendors, especially those designed for Government are 10 years behind the curve in their design which is always a challenge. So we are working on a mixed approach of running on the host, and then allowing document consumption locally.