I haven't talked about desktop hardware for a good while.  Years ago we bought several hundred HP t5725 workstations.  They're still production and working great, and are projected to run their full 10 year duty cycle.  HP replaced the t5725 with the t5745 model which offered better performance and 1Gb networking.  We have purchased around 50 of the t5745s and given them to users that need faster performance; such as those that use Google Earth and large PDF files.  They too should provide a 10 year duty cycle.

In recent months the t5745 was discontinued and replaced with the t610.  Specs are here.   In short, it's an AMD Dual-Core T56N APU with Radeon HD 6320 Graphics 1.65 GHz running the Ubuntu operating system.  We purchased one device for around $400 dollars.  My first inclination of course was to open it up and look under the hood.  Pictures and comments are below.

In the coming weeks, I'm going to install our custom modifications into the base OS and get it working the same as the earlier models.

I've spoken about thin clients many times, but wanted to mention again how incredibly cost effective and stable they are to run for enterprise use.  A small City of 10 employees would not reap benefits, but as you get into the hundreds of users, the savings are clear.  We have about 560 of them deployed around various City buildings.  $400 purchase price with a 10 year duty cycle yields $40 per year (hardware only) desktop costs.  When one of them dies, the users have nothing saved locally and our support group just walks down and replaces the hardware.  The user is back up again in just a few minutes with no loss of productivity.

Here is the inside of the t610, the heat from the CPU is moved away with copper and vents.  No moving parts, no fans.  The blue module in the upper left hand corner is the flash "hard drive".  These can be 1GB or 2GB and are cheap and easily upgraded. 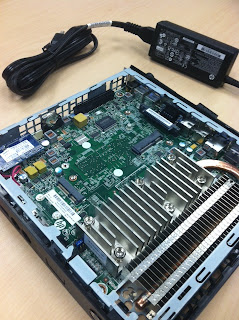 Lots of ports on the front, nice design. 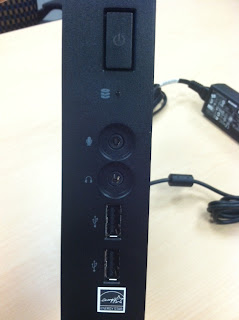 More ports and some legacy connections on the back.  All of our hardware should connect and work. 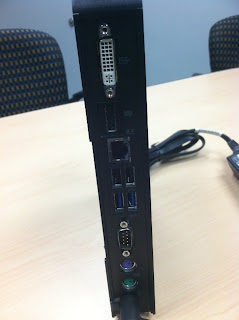 The entire case has no screws and pops apart with just clips. Here it is back together. 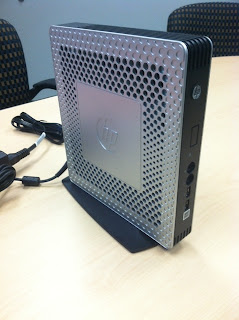 "I'm going to install our custom modifications into the base OS"

Why on earth do municipal employees need custom modifications to an operating system? That's insane. Are you saying these users are doing such unique work that conventional operating system technology isn't enough to support it? Why can't you just install a stock Linux distribution?

To comment 1:
Don't be silly. Its called "Responding to your actual customers needs" and Dave has been doing it for years, and publicly through this blog.

Thank you for the question and support. All of the mods are indeed on this blog going back for many years. Most of the work is in a tarball that I can just lay down and some .deb package installs. It's not hard and doesn't take a lot of time. HP gets the devices close to our needs, but the whole point of buying the Linux thin client models is to allow you to make custom tweaks.

In summary:
+ HP does not expect server side sound, install PulseAudio
+ We used FTP server to allow users to gain limited access to USB sticks
+ Chooser screen to allow users to pick which server they want to use
+ Lockdowns to hide certain features the users don't need. For instance, we aren't using Citrix, which is supported on this device.
+ NX client and technology, not installed by HP
+ Mesa packages to allow Google Earth to work, not supported by HP
+ Infrastructure to allow us to configure the devices remotely and not have to touch them after upgrades. Certain aspects of the default HP build don't do this.
+ Rdesktop patches and some scripts to allow the server to offload RDP sessions to the workstations.
+ Removing packages we don't need to reduce boot times

This is a onetime thing for each model, and only has to be done because this hardware is brand new.

Hey Dave, awesome post! I got three of these units at half price and have enjoyed playing with them so far.

One of them is not booting, and is giving me a beep code of 4 beeps (with the power light flashing red, in sync with the beeps)... Any ideas?

I got these from a supplier who was dumping them and were final sale, so hoping to be able to fix it!

@Robin: They're cool devices. Make sure that you use the Ubuntu build provided by HP. It mounts file systems in memory so that it does not hammer the flash device like a normal distro would. Those drives only have a fixed amount of writes, similar to a USB stick. As for the beeping; if memory serves I think that indicates hardware problem with memory or the video card. It's low enough level so that the device won't even attempt to boot.

In the reply post to Robin, Dave mentioned using "the Ubuntu build provided by HP", can anyone provide me with a link to such a build?

I want to use it to boot from an USB stick in order to avoid using the not-so-ideal Windows 7 Embedded RDP client...

Hi Dave, I bought this client and previous owner removed almost everything. Most of removed parts is quite easily replaceable. I just need exact name of BIOS flash chip. Could you please take photo of this chip? It is located nearby jumpers. Without this flash chip, client can't boot :( Once I get this chip, I can flash right contents and hope, it would boot...